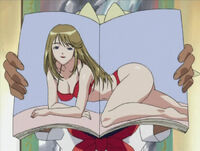 In chapter 174 of the manga Negima! Magister Negi Magi, Yuna Akashi discovers some adult magazines hidden within her father's desk while attempting to look for documents he had hidden from her.

Retrieved from "https://lovehina.fandom.com/wiki/Adult_Magazine?oldid=14603"
Community content is available under CC-BY-SA unless otherwise noted.