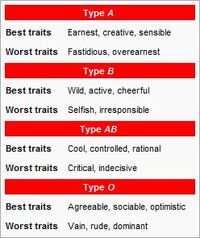 There is a popular belief in Japan that a person's blood type is predictive of their personality, temperament, and compatibility with others, similar to western astrology.

Stemming back to the findings of Austrian scientist Karl Landsteiner in 1900 and growing from its failed use as a means to predict the temperaments and reactions of certain races, the theory’s modern popularity originated with publications by Masahiko Nomi in the 1970s. In the modern world, although there is no proven correlation between blood type and personality, it remains popular with many matchmaking services, much in the same way astrology horoscopes are used in the west.

It is common among anime and manga authors to give their characters corresponding blood types to further flesh out their personalities.

Retrieved from "https://lovehina.fandom.com/wiki/Blood_Type?oldid=5934"
Community content is available under CC-BY-SA unless otherwise noted.