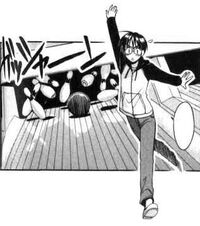 Bowling is a competitive sport in which a player (the "bowler") rolls a bowling ball down a wooden or synthetic lane with the objective of scoring points by knocking down as many pins as possible.

A game of ten-pin bowling is divided into ten rounds (called "frames"). In a frame, each player is given two opportunities to knock down the skittle targets (called "pins") at the end of the lane. The player rolls the first ball at the pins. If the first ball knocks down all ten pins, it is called a "strike" and the frame is completed. When pins are left standing after the first ball, those that are knocked down are counted and then removed. Then the player rolls a second ball and if all the remaining pins are knocked down, it is called a "spare". There are bonuses for removing all the pins. If there is more than one player scheduled on a lane, play passes to the next player until all players have completed the frame. Then play continues with the next frame.
One point is scored for each pin that is knocked over for each frame. When all ten pins are knocked down with the first ball (called a strike), a player is awarded ten points, plus an additional bonus of whatever is scored with the next two balls.

Retrieved from "https://lovehina.fandom.com/wiki/Bowling?oldid=12384"
Community content is available under CC-BY-SA unless otherwise noted.