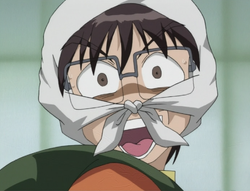 The Burglar Mask is a staple attire worn by burglars or ninja in Japanese satire media.

This "mask" is derived from ancient Japanese romantic practices, when young unmarried women were not to engage in relations with young men outside of social settings.
To get around this rule, during night time visits or romantic "booty calls", the young man would wear a "burglar mask" so that, if they were caught or their activities were later discovered, the young woman could claim lack of knowledge of his identity and save face. However, while the hand towel does distort the wearer's appearance somewhat, it is still reasonably easy to identify the "burglar's" identity.
Over time, the classical "burglar mask" became comic shorthand for "Incompetent Sneaky Person" and became an identifiable staple for burglars in comedic media.

Retrieved from "https://lovehina.fandom.com/wiki/Burglar_Mask?oldid=15448"
Community content is available under CC-BY-SA unless otherwise noted.