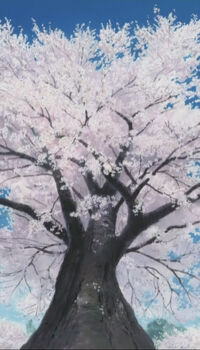 The Cherry Blossom; also called Hill Cherry, Oriental Cherry, East Asian Cherry or Sakura, is a species of cherry tree native to Japan, Korea and China. It is a common symbolic element in Japanese media.
Falling sakura petals have several interconnected meanings, depending on who they are falling on and the context thereof. Cherry trees bloom en masse in early spring, usually in the month of April, but the white-to-coral petals shed and rot very quickly and the peak bloom is only a week or two. There is a celebration called Hanami (Cherry Blossom Viewing) associated with the peak bloom, which often entails picnics and drinking with old friends under the cherry trees.

In Japan, cherry blossoms are an enduring metaphor for the ephemeral nature of life. Due to how they blossom in spring, they have becoming the Japanese symbology for the season and its associations (such as new beginnings and young love), however, the transience of the blossoms, their extreme beauty and quick death, has also often seen them being associated with mortality; for this reason, cherry blossoms are considered richly symbolic, and have been utilized often in Japanese art, manga, anime, and film, as well as at musical performances for ambient effect. The sakura flower is represented on all manner of consumer goods in Japan, including kimono, stationery, and dishware.

Retrieved from "https://lovehina.fandom.com/wiki/Cherry_Blossom?oldid=10621"
Community content is available under CC-BY-SA unless otherwise noted.