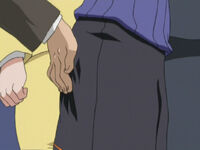 A Chikan (痴漢, チカン, or ちかん) is a term used to refer to a male criminal who gropes women on trains.
Somewhat of an epidemic in Japan, the cultural aversion to causing a scene, breaking the peaceful atmosphere, and drawing attention to a potentially embarrassing situation means most victims and bystanders stand quiet during the assault, which can last for a considerable time due to the long hours Japanese commuters take on trains.

As part of the effort to combat the problem, some railway companies designate "Women-only" passenger cars during rush hours and have issued posters warning of and against the practise.
Although crowded trains are the most frequent targets, another common setting are bicycle parking areas, where people bent over unlocking their bikes are targets.

Retrieved from "https://lovehina.fandom.com/wiki/Chikan?oldid=13815"
Community content is available under CC-BY-SA unless otherwise noted.