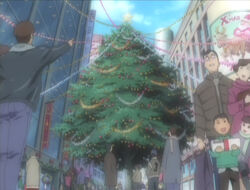 Celebrated as the birth of Jesus Christ in most western countries, Christmas in Japan is encouraged by the commercial sector of the country and became known solely as a festive event without any religious connotation. Christmas Eve is thought of as a romantic day, in which couples spend together and exchange presents.

Gifts are exchanged and children's presents are left next to their pillow at night. Christmas parties are held on and around Christmas Day; a unique feature of these celebrations is the Japanese Christmas cake, which is often a white whipped cream cake with strawberries.

The first recorded Christmas in Japan was celebrated with a Mass held by Jesuit missionaries in Yamaguchi Prefecture in 1552. Some believe that unrecorded celebrations were held before this date, starting in 1549, when Saint Francis Xavier arrived in Japan to begin missionary work.
Starting with the expulsion of missionaries in 1587, Christianity was banned throughout Japan beginning in 1612 and the public practice of Christmas subsequently ceased. However, a small enclave of Japanese Christians, known as Kakure Kirishitan ("hidden Christians"), continued to practice over the next 250 years in secret.

Christianity and Christmas practices re-emerged at the beginning of the Meiji period. Influenced by American customs, Christmas parties were held and presents were exchanged. The practice slowly spread in major cities, but its proximity to the New Year's celebrations made it smaller in focus.
During World War II, all celebrations and customs were suppressed. From the 1960s, with the aid of a rapidly expanding economy and influence from American television dramas, Christmas became popular once again.

The "traditional" Christmas dinner is expected to include these foods:

Christmas Chicken (KFC Fried Chicken)
The notion of a Fried Chicken dinner in Japan on Christmas originated in 1974 when a group of foreigners couldn’t find Turkey on Christmas Day and opted for fried chicken from KFC instead. The company saw this as a commercial opportunity and launched a Christmas Meal combo specially for the season. The popularity of this venture, possibly due to how relatively new western fast food was to the country (the first KFC Japan opened in Nagoya in 1970), saw fried chicken become quickly imbedded in the image of Christmas Dinner in Japan. The popularity of fried chicken at Christmas today is such that orders are placed as much as two months in advance.

Retrieved from "https://lovehina.fandom.com/wiki/Christmas?oldid=15762"
Community content is available under CC-BY-SA unless otherwise noted.