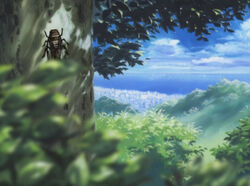 The Cicada is associated with the summer season in Japan.

Since the cicada emerges from the ground to sing every summer, in Japan it is seen as a symbol of reincarnation and new beginnings. Of special importance is the fact that the cicada moults, leaving behind an empty shell. Furthermore, since the cicada only lives for the short period of time, long enough to attract a mate with its song and complete the process of fertilization, they are seen as a symbol of evanescence.

Retrieved from "https://lovehina.fandom.com/wiki/Cicada?oldid=11551"
Community content is available under CC-BY-SA unless otherwise noted.