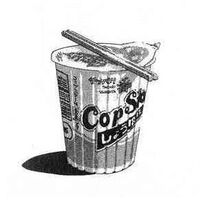 Cup Noodles are a type of instant ramen/noodle snack packaged in a foam, hard plastic or paper cup. The cup contains a precooked (fried) block of noodles that requires only the addition of hot water and in some cases flavoring that is included in packaging.
With a cooking time of around three minutes the product is known for being inexpensive and easy to prepare.

Instant noodles were invented in 1958 by Momofuku Ando, the Taiwanese-born founder of the Japanese food company Nissin. He used Chikin Ramen (Chicken Ramen) as the first instant ramen noodles. In 1970, Nissin formed the subsidiary Nissin Foods (USA) Co. Inc, to sell instant noodles in the United States. Nissin recognized that the bowls traditionally used to package instant noodles were not common in the U.S, so they instead turned to the paper cup; in 1971, they introduced instant ramen packaged in a foam cup. Originally, the product was actually known as Cup O' Noodles; this was changed in 1993 to its current name (Cup Noodle).

Today, instant noodles in Japan are often sold in foam bowls, sometimes with plastic utensils. Foam bowls are easily portable; they are very convenient for outdoor activities. Foam bowls are inexpensive, disposable, light, and easy to hold since they insulate heat well and thus convenient as an "on-the-go" meal.

Due to Saati's poor cooking skills before she learnt how to make curry, Hitoshi had to frequently resort to having Cup Noodles for dinner.

Retrieved from "https://lovehina.fandom.com/wiki/Cup_Noodles?oldid=12563"
Community content is available under CC-BY-SA unless otherwise noted.