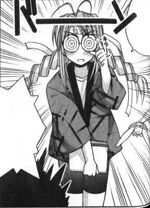 A Dotera is a padded kimono jacket worn during the winter in Japan for warmth.

Either lined with cotton or made with thick wool, the dotera is usually regarded as a type of casual wear jacket and has become associated in modern culture with being worn by those who do not care about their appearance (much like tracksuit pants/jackets).

Retrieved from "https://lovehina.fandom.com/wiki/Dotera?oldid=12374"
Community content is available under CC-BY-SA unless otherwise noted.