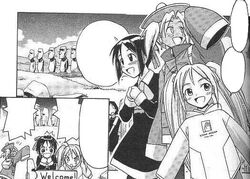 Easter Island is a Polynesian island in the south-eastern Pacific Ocean.
A World Heritage Site protected within the bounds of a national park, Easter Island is widely famous for its 887 monumental statues, called moai, that were created by the early Rapanui people who have been subjected to various European slave trades, plagues and deseases to the point of near extinction.

Shinobu, Sarah and Kaolla accidentally land on Easter Island while searching for Naru and Keitaro on Pararakelse Island.

Retrieved from "https://lovehina.fandom.com/wiki/Easter_Island?oldid=15237"
Community content is available under CC-BY-SA unless otherwise noted.