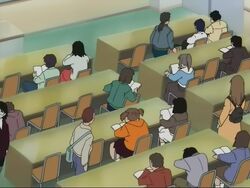 "Like I can really say, "Hey folks! I got an E! Now I can E-asily get into a top school!"...Wait a minute, that might just work."
—Keitaro Urashima

Traditionally, the exam system essentially revolves around a written test; covering various subjects such as Math, Language and Social studies as well as History and Classical literature. Each test is designed around the requirements of a chosen graduate school or a certain level of education. The results of these tests act as a means to reveal whether or not a student has the level of education and/or the requirements to attend a graduate school.

Primary, secondary schools and universities were introduced into Japan in 1872 as a result of the Meiji Restoration. Since 1947, compulsory education in Japan consists of first Elementary school and then Middle school. Almost all children continue their education at a three-year senior High school, and High school graduates may have the option of attending a university, junior college or trade school if they wish.
Japan’s education is very competitive, especially for entrance to institutions of higher education.

Elementary school starts at age 6 and ends at age 12 (grades 1-6). Middle schools cover grades 7-9 (age 13-15), while High schools cover grades 10-12 (ages 16-18).
Consisting of three semesters, the school year begins in April, with the first semester continuing until July. The second semester runs from September to December and the third covers January to March.

The following exams occur after or during a student’s graduation of High school.

A mock/practise exam for students to test how well they are going and whether or not they need to alter their study methods. Usually only Preperation Schools offer mock exams.
The school marks the exams and provides the student with an overall percentage on the likely-hood of passing the entry exams of their chosen university as well as a systematic grade on each scholastic subject covered in the exam. From this result sheet the student can deduce whether they have a chance of passing the actual Center and Entry exams.

Officially known as the National Center Test for University Admissions, the Center Exam is the exam that students take should they wish to attend a university, junior college or trade school.
The exam is held every year in mid-January at various locations. Passing these exams usually results in accepted entrance to their chosen university, however, universities of higher calibre such as Tokyo U or K University require additional exams that will only be offered to students who pass their Center exams.

Exam answers are announced at a later date, usually published in the newspaper. Due to how the exam center operate, students cannot find out their score before applying to their preferred universities. Therefore, students that wish to chose their universities based on their results, they would also write their answers on a separate piece of paper (most of the time on the question sheet which they can keep) and check their answers using the newspaper, marking their score out of a total of 900 points.

Also known as the Second Stage Exam, these exams only occur for students applying for high calibre schools and basically act in a similar fashion to Center Exams.

After attending the Center or Entry exams, students may receive their results via mail or must view the exam answers in a special section of the newspaper and mark their exam sheet themselves (presumably this is a copy of the initial exam sheet that they used and handed in during the exam). If the results are desirable the student may mail their final application documents and exam ticket to become a student of that university.
Some universities possess an announcement board erected on the university campus that lists the students who have passed via name and ID number, such is the case with Tokyo University.

In A.I. Love You Hitoshi Kobe, due to being a senior high schooler, must participate in various school exams as part of his school life.

Retrieved from "https://lovehina.fandom.com/wiki/Exams?oldid=14857"
Community content is available under CC-BY-SA unless otherwise noted.