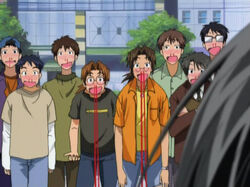 Fan service (ファンサービス fan sābisu), Fanservice, Service cut(サービスカット sābisu katto), or simply Service (サービス sābisu), is a vaguely-defined term primarily used for anime and manga to refer to material that is designed to amuse or excite the audience with gratuitous elements that are usually unnecessary to the storyline.

The typical, but not only, element of fan service is racy or sexual content used to titillate the viewer, such as nudity or other forms of eye candy. Shower scenes were a very common fan service in anime of the 1980s and 1990s, while many more recent TV series use trips to Onsen, beaches or trips to tropical locales in order to showcase the characters in bathing suits or various states of relative undress that would otherwise be out of place with the tone of a series.

Elements of Fan Service may include

Retrieved from "https://lovehina.fandom.com/wiki/Fanservice?oldid=14798"
Community content is available under CC-BY-SA unless otherwise noted.