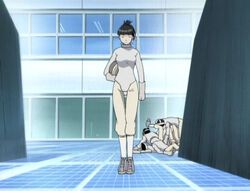 Fencing is a combat sport involving bladed weapons such as the Foil, Sabre and Epee.
The sport evolved from the art of medieval jousting and duels between opponants in European battlefields. Eventually considered an art for the higher class, schools were created to teach practitioners the techniques required. Fencing has since been featured at every modern Olympic Games.

Retrieved from "https://lovehina.fandom.com/wiki/Fencing?oldid=10995"
Community content is available under CC-BY-SA unless otherwise noted.