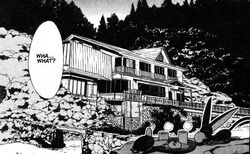 The Forbidden Annex, also known as the Legendary Annex, is the northern-most building of the Hinata House complex.

Partially covered by a land slide the annex was known as the “Inn of Fateful Unions” because any couple that stayed the night always ended up together. The Urashima family sealed the annex due to the potential for the annex’s power to be abused and later closed the area off permanently due to the danger the land slide presented.
When Keitaro attempted to use the Annex’s power to help move along his relationship with Naru he accidentally proposed to Kanako, his sister, instead. In his endeavour to beat the annex’s magic the annex was destroyed.

The Forbidden Annex is based off of the image of Kanayama's Museum and hotspring waterfall.

Add a photo to this gallery
Retrieved from "https://lovehina.fandom.com/wiki/Forbidden_Annex?oldid=15693"
Community content is available under CC-BY-SA unless otherwise noted.