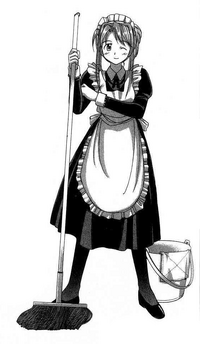 French Maid Uniform is a style of servant's dress that evolved from the typical afternoon uniforms of French maids who worked as servants for English socialites during the 19th century and their later use by stereotypical soubrette characters in burlesque dramas and bedroom farces.

The designs of a French maid uniform can range widely from a conservative look to revealing. It is often used as a routine form of servitude to a dominant partner, in Cosplay, sexual roleplaying, and fetishism. Depending on design details, some forms can be classified as Lingerie.

In the late 1800’s, it was popular for American and English families to hire young, attractive French girls to wait on them and do their housekeeping. These girls were referred to as "maidens" - the word later shortened to just "maids". If a family was not lucky enough to obtain a French maid, they would hire British maids and request that they speak in a French accent. 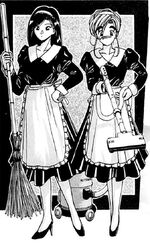 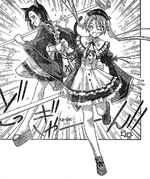 Retrieved from "https://lovehina.fandom.com/wiki/French_Maid_Uniform?oldid=14596"
Community content is available under CC-BY-SA unless otherwise noted.