Genki Drinks (Vigor Drinks) are energy drinks that were first pioneered in Japan in 1962 when Taisho Pharmaceuticals Co., Ltd. combined taurine with vitamin B ingredients to create what is now known as Lipovitan D. Since the development of this drink, various additional tonics have been developed for the purpose of energy supplementation, curing hangovers, improve health, and boost various energy levels.

A popular energy supplement, genki drinks can be found in most convenience stores in the country. 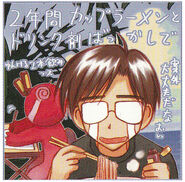 Retrieved from "https://lovehina.fandom.com/wiki/Genki_Drinks?oldid=14670"
Community content is available under CC-BY-SA unless otherwise noted.