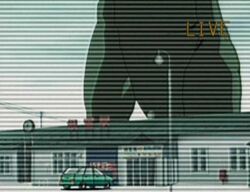 Godzilla (ゴジラ, Gojira) is a Japanese movie monster (a daikaijū), first appearing in Ishirō Honda's 1954 film Godzilla. Since then, Godzilla has gone on to become a worldwide pop culture icon starring in 28 films produced by Toho Co., Ltd. The monster has appeared in numerous other media incarnations including video games, novels, comic books, television series, and American remakes.

With the bombings of Hiroshima and Nagasaki still fresh in the Japanese consciousness, Godzilla was conceived as a monster created by nuclear detonations and a metaphor for nuclear weapons and the Second World War in general. As the film series expanded, the stories took on less serious undertones portraying Godzilla in the role of a hero, while later movies returned to depicting the character as a destructive monster.

Retrieved from "https://lovehina.fandom.com/wiki/Godzilla?oldid=10064"
Community content is available under CC-BY-SA unless otherwise noted.