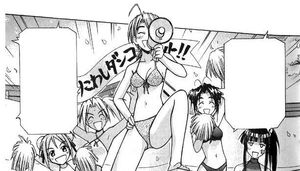 The Harem Protection Agency is the name given by Mitsune Konno to the protest group formed by the Hinata apartment girls to protest the destruction of the dormitory.

Led by Mitsune, the group is announced as a “bunch of worthless slackers” who conducted their protest in the institute’s hotsprings, donned in swimwear while eating food and drinking alcohol.
While the girls initially managed to distract the construction workers, Kanako Urashima managed to kick them off of the property in order to continue the building renovations.

Retrieved from "https://lovehina.fandom.com/wiki/Harem_Protection_Agency?oldid=5384"
Community content is available under CC-BY-SA unless otherwise noted.