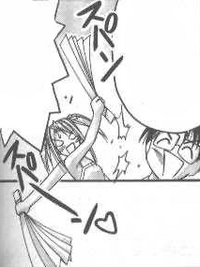 A Harisen (ハリセン "slapping fan") is a folded paper fan used commonly as a tool of a tsukkomi ("straight man") character in a two-man comedy routine called a Manzai; a slapstick comedy routine that originated from the Kansai region of Japan.

Typically, the routine involves the boke ("foolish man") doing or saying something foolish or idiotic and the tsukkomi hits them with the harisen as a form of punishment. The harisen became a popular tool in such comedies due to it's ability to make a loud noise upon contact but leave little damage or pain upon the "victim". 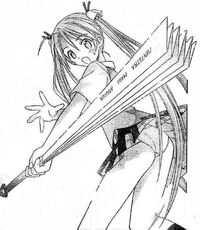 Asuna Kagurazaka's talisman, the Ensis Exorcizans, in Negima! Magister Negi Magi can take the form of an oversized harisen that can exorcise demons with a single swipe until she is able to control her ki energy, enabling her to transform it into its true sword form.
While powerful against demons, the harisen has little to no effect against opponents that possess no magic, such as robots and non-magical beings.

Retrieved from "https://lovehina.fandom.com/wiki/Harisen?oldid=15746"
Community content is available under CC-BY-SA unless otherwise noted.