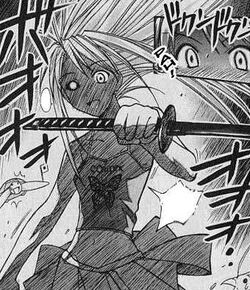 Hina: The Ominous Blade, also known as the Cursed Blade, the You-tou Hinata or the Hina Blade, is a cursed katana sword possessing the spirit of an enemy that once fought the entire line of Shinmei-ryu swordsmen to near extinction.

Able to possess and sap the power of its wielder, or if channelled correctly, provide immense strength and power at the cost of the wielder’s soul, the sword was responsible for turning the city of Kyoto into a sea of flame, it took the entire Shinmei-ryu school to defeat its wielder and seal the sword.
Ending up as a family heirloom for the Urashima Family, who presumably guarded it, the sword was presented to Motoko Aoyama as a replacement blade for her Shisui katana. However, Motoko sensed the evil that the sword emanated and refused to wield it, instead Naru was possessed when she drew the blade to help Motoko in a battle against her sister, Tsuruko Aoyama. Fortunately the blade was sealed by Motoko before it could do much damage.

Although it was sealed, it only meant that Motoko could wield it without the danger of being possessed while other possessors; such as Tama and a Hot Springs Monkey, were still in danger of being consumed.

Retrieved from "https://lovehina.fandom.com/wiki/Hina_Blade?oldid=14860"
Community content is available under CC-BY-SA unless otherwise noted.