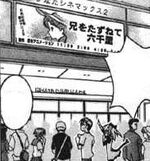 The Hinata Cineplex is a cineplex that Keitaro Urashima takes Naru Narusegawa to on their date. While initially Naru was sceptical over Keitaro's choice of watching a martial arts movie, she eventually discovered that she liked it very much; becoming lively enough to unintentionally begin beating down Keitaro during the movie.

While taking Kaolla on a date in an attempt to cheer her up, Keitaro takes her to see a movie at the cineplex about a brother and sister.

Add a photo to this gallery
Retrieved from "https://lovehina.fandom.com/wiki/Hinata_Cineplex?oldid=10258"
Community content is available under CC-BY-SA unless otherwise noted.