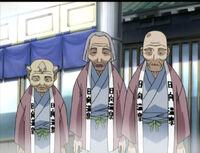 The Hinata Elders are a group of elder gentlemen who spend their time wandering the streets of Hinata, observing the lives and events of the town.

Appearing only in the anime, the elders make various appearances throughout the episodes, commenting on the actions of various characters and remarking about the nature of following one's dreams.

The Hinata Elders have one theme from the Love Hina anime series, "Theme of the Senior Citizens Club", which is available in the Love Hina Original Sound File soundtrack.

Retrieved from "https://lovehina.fandom.com/wiki/Hinata_Elders?oldid=12293"
Community content is available under CC-BY-SA unless otherwise noted.