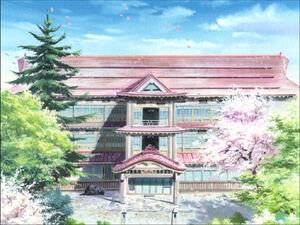 The Hinata House (also known as Hinata Sou, the Hinata Dorms, the Hinata Apartments, or Hinata Inn) is the primary location where the Love Hina series occurs.

Located in the hot springs town of Hinata, the Hinata House was originally known as Hinata Inn; a Hot Springs lodge famous for its open-air onsen and its “Inn of Fateful Unions”, where any couple that stayed the night always ended up together, the Inn fell in popularity after a landslide caused the annex where the lodge’s magic occurred to be condemned and locked away.
Ownership of the Inn was passed down through the Urashima Family until Hina Urashima turned the Inn into an All-Girls Dormitory; renaming it Hinata House. The landlord ownership was then passed to Keitaro Urashima who maintained the dormitory. His sister, Kanoko Urashima, attempted to change it back into an Inn temporarily but ultimately failed and the Hinata House remained as a dormitory, becoming legendary for the seeming power to grant its residents the ability to pass the Tokyo University exam.

Beneath Hinata Inn lies a tunnel complex that was supposedly built as a sanctuary from pirates. Throughout the years the tunnel system grew to accommodate various rooms as a basement level with various secret tunnel “ducts” acting as shortcuts throughout the above-ground complex.
Some of the more notable rooms within the system are Moe’s room (in the anime) and Kaolla Su’s vehicle hangar; within which vehicles such as the Mecha-Tama 00, the Mecha-Tama 04 and Seta’s Van are stored.

In the anime the man-made tunnel system sits right next to a more mysterious underground complex that Noriyasu Seta attempted to excavate before discovering that the entire system had been created by rogue Mecha-Tamas.

The manager of the Hinata House lives in this room. First it belonged to Hina Urashima but was then emptied after she left on her world-wide vacation. Keitaro Urashima later took up residency here and, temporarily, Kanako Urashima during Keitaro’s trip to America.

The room of Shinobu Maehara possesses a western style bed and contains a large collection of plush animal toys.

The room of Naru Narusegawa is located directly above the Landlord’s room. A hole has been cut between the rooms to allow access between the two where Naru used to use to visit Hina Urashima before Keitaro arrived.

Motoko Aoyama’s room is styled as a traditional Japanese room. As a martial artist she keeps various weapons in her room as well as a suit of samurai armour and a Kamidana shrine above the doorway. Her wardrobe can be used to directly access Kaolla’s room.

The room that belongs to Kaolla Su has been converted completely into a miniature jungle; complete with trees, foliage and a small lake that leads (somehow) to the outdoor hotsprings. Steam from the boiler room leaks over into Kaolla's room. 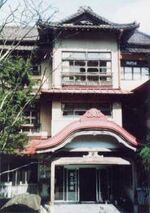 In the original conception in 1997, the Hinata inn was a normal two-story, 12-room prestigious girl's-school contract apartment, catering for kindergarten students to university students. (This concept would later become the basis for Mutsumi's Apartment). The apartments were run by a graduate-student mother, who was looking after a daughter in kindergarten who had a pet hamster.
While the mother and daughter lived in 102, and the main character in 101, in 201 lived a girl noted as "long-hair", in 202 lived the girl who would become noted as "Kendo", in 203 lived a girl noted as "short-hair",

By early 1998, the apartment's design was changed into a family-owned inn based on the image of a hotspring inn in Hanamaki, Iwate prefecture.
Named the Akaishizawa Inn, the main character would inherit the inn from his grandmother and attempt to sell it off due to its run-down nature. "Long-hair" girl, now known as "Midori", would fall through the floor of her room to land in the main character's room and lose her memory, resulting in her now living in his room instead. In addition to "Short-hair (now named "Konno") and "Kendo", an Indian "Foreigner" girl and a "Junior High School Student" were added to the residency.

In the Mao-chan! manga series, the Hinata Hotel makes a cameo as the Hinata Ryokan; a hotsprings hotel owned and run by Nana Nanasegawa and her fiance Keinosuke Urashima.
Known as the number one hotspring in Japan, the ryokan came under a crisis when the Onsen King, secretly Emperor Galactica, attempted to steal the hotspring water for himself as part of the aliens' plans to steal all of Japan's landmarks.
As the Defence Corps also booked a stay at the ryokan on the same day, the two parties ended up fighting over possession of the hotsprings through a game of Table Tennis. However, while Mao-chan had won the match, the Emperor threw a tantrum and caused the ground to split underneath the ryokan; splitting the hotel in half and, while initially causing the remainder of the hotspring to disappear, caused a new, larger hotspring to be created.

In the anime Ground Defense Force! Mao-chan, it is said that the hotsprings are very responsive too prayers and are good luck for passing the Tokyo University entrance exams. Noted as being really beaten down; for which Nana blames her husband; Keinosuke, however, it is revealed that the holes in the walls are caused by Nana's rampaging temper over assumptions about Keinosuke. When Nana disappears from the lodge, Mao-chan and the Defence Force takes over running of the Inn and defends it from a cute monkey alien who wishes to use the hotspring to become smarter. However, in the process of catching the alien the hotspring was destroyed.

Retrieved from "https://lovehina.fandom.com/wiki/Hinata_House?oldid=15764"
Community content is available under CC-BY-SA unless otherwise noted.