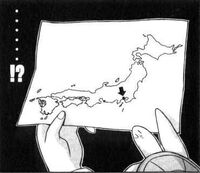 In 710, Nara became the capital of Japan and a struggle for power between the imperial family and the Buddhist clergy began to emerge. So much so that the capital was moved to Kyoto in 794 to escape the powerbase that the clergy had formed in Nara.
Political power eventually passed over to the Fujiwara family due to the number of Emperors being born from them and despite Japan enjoying a cultural Golden Age the country eventually fell into a series of rebellions from 1156 to 1180 that resulted in the country being led by various feudal lords known as Shogun and saw the rise of the Samurai warrior class.

The story of A.I. Love You occurs within Japan.

The story of Itsudatte My Santa! occurs within Japan.

The story of UQ Holder! occurs within Japan.

Retrieved from "https://lovehina.fandom.com/wiki/Japan?oldid=12518"
Community content is available under CC-BY-SA unless otherwise noted.