Traditional Japanese Bathing is considerable different than what is practised in Western Culture. While in Western Culture all cleaning, scrubbing and rinsing is down within the shower/hot tub, in Japanese Culture, individuals clean, scrub and rinse their bodies outside of the hot tub, only entering afterwards for a final rinse and relaxation.

The custom is to thoroughly clean oneself with soap and rinse before entering the tub, so as not to contaminate the bath water. The tub itself is not for cleaning, but the social contact and well-being. Until the 19th century, the Japanese did not use soap, but rubbed the skin with certain herbs, or rice bran, which was also a natural exfoliant.
After soaping, the individual would rinse the soap from their body either via a shower or a filled water container/tub. 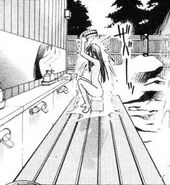 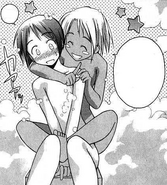 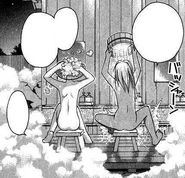 Retrieved from "https://lovehina.fandom.com/wiki/Japanese_Bathing?oldid=14480"
Community content is available under CC-BY-SA unless otherwise noted.