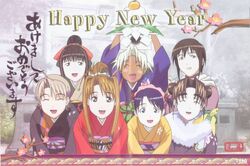 The Japanese New Year (正月 shōgatsu) is celebrated on New Year's Day (January 1st) each year.
Considered by most Japanese to be one of the most important annual events of the year, the event has been celebrated for centuries with many unique customs focusing on the renewal, or clean-slate that the new year brings.

A common way of celebrating the New Year is Hatsumōde; the year’s first trip to a shrine or temple. Many people visit a shrine after midnight on December 31 or sometime during the day on January 1st. If the weather is good, people often dress up or wear kimono.
At midnight on December 31st, Buddhist temples all over Japan ring their bells a 108 times to symbolize the 108 human sins in Buddhist belief. The action is meant to symbolize the cleansing of these sins and the 108 worldly desires regarding sense and feeling in every Japanese citizen.

Retrieved from "https://lovehina.fandom.com/wiki/Japanese_New_Year?oldid=13360"
Community content is available under CC-BY-SA unless otherwise noted.