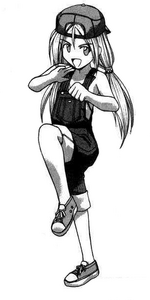 Jeet Kune Do is a hybrid martial arts system and life philosophy founded by martial artist Bruce Lee. The style is characterised by the utilization of direct, non classical, straightforward movements. Practitioners of the style believe in minimal movement with maximum effect and extreme speed.

The style is named for the concept of interception; intercepting an attack with an attack or attacking an opponent while they are about to attack. As such, the effectiveness of the practitioner's ability depends on extreme speed, strength and accuracy.

Retrieved from "https://lovehina.fandom.com/wiki/Jeet_Kune_Do?oldid=14497"
Community content is available under CC-BY-SA unless otherwise noted.