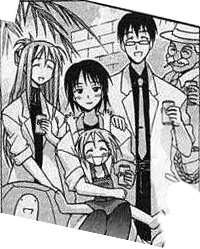 Julia McDougal is the biological mother of Sarah McDougal and the companion of Haruka Urashima and Noriyasu Seta during their past archaeological adventures.

First meeting Haruka and Seta while attending Tokyo University, the trio quickly formed a bond and took up working as excavation assistants for Nyamo Namo's grandfather; traveling across the globe and becoming embroiled in various adventures. After a while, the three become involved in a love triangle; with both Julia and Haruka vying for Seta's attention.
While initially ignorant of their interest, Seta makes a promise that, by the time he was thirty, he would make up his mind and choose one of them as his love, however, Julia passed away soon after due to an unknown event.
The relationship between Haruka and Seta deteriorated soon after and Haruka returned to work at the Hinata Inn while Seta continued his excavation adventures.

Retrieved from "https://lovehina.fandom.com/wiki/Julia_McDougal?oldid=15909"
Community content is available under CC-BY-SA unless otherwise noted.