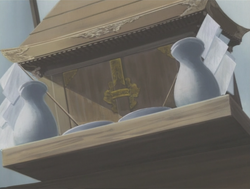 The kamidana is typically placed high on a wall and contains a wide variety of items related to Shinto-style ceremonies, the most prominent of which is the "shintai", an object meant to house a chosen kami. Kamidana shintai are most commonly small circular mirrors, though they can also be stones (magatama), jewels, or some other object with largely symbolic value. Failing that, an ofuda, a type of charm, can also be used.
The kami within the shintai is often the deity of the local shrine or one particular to the house owner's profession.

Retrieved from "https://lovehina.fandom.com/wiki/Kamidana?oldid=15710"
Community content is available under CC-BY-SA unless otherwise noted.