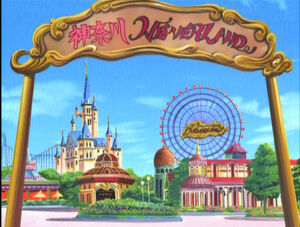 Kanagawa Neverland is a newly opened theme park located in the Kanagawa prefecture of Japan. It is a popular place for dates.

Recently opened in the manga, the theme park held an opening event on the 3rd of October, 1999. The event featured specialized tickets for administration which was invitation only.
Possessing various attractions such as roller-coasters, haunted houses, steamboat cruise, missile cars, tea-cup rides and various eateries and gift shops, some of the theme park’s notable exhibits are: the Asia Sake Shop/Asian Wine Exhibit: “All-you-can-drink-free-sake-night”, the European Doll Shop/European Teddy-bear Exhibit, the Illusions of Japanese Swords/Blades of Master Swordsmen Exhibit, and the Nankoku Banana Shop/Southern Bananas Exhibit.

Kanagawa Neverland has one theme from the Love Hina anime series, "A Date in a Theme Park", which is available in the Love Hina Original Sound File soundtrack.

At the end of each "dating segment" in Love Hina: Gojasu Chiratto Happening, Keitaro takes the target girl to the ferris wheel of Kanagawa Neverland where they profess their love.

Retrieved from "https://lovehina.fandom.com/wiki/Kanagawa_Neverland?oldid=15404"
Community content is available under CC-BY-SA unless otherwise noted.