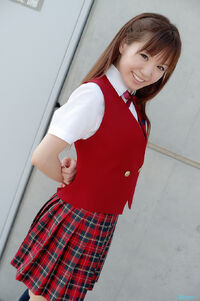 Toshiko "Kanon" Akamatsu (赤松 佳音) is a Japanese Pop Idol-turned model/professional cosplayer born on the 24th of August, 1979. Born in Tokyo, she graduated from Kunitachi College of music, majoring in singing. During her career she met and later married mangaka Ken Akamatsu in July, 2002.

During her career, Kanon created the pop song Sorega Kanoriyu which was released in Japan in 2007. The song goes for 4 minutes and 30 seconds.

Community content is available under CC-BY-SA unless otherwise noted.
Advertisement