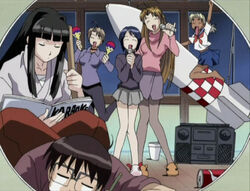 Karaoke (カラオケ, "empty orchestra") is a form of interactive entertainment or video game in which amateur singers sing along with recorded music using a microphone and public address system. The music usually consists of well-known pop songs minus the lead vocal. Lyrics are usually displayed on a video screen, along with a moving symbol or changing color and/or music video images, to guide the singer.

There are various disputes about who first invented the name karaoke. One claim is that the karaoke styled machine was invented by Japanese musician Daisuke Inoue in Kobe, Japan, in 1971. After becoming popular in Japan, karaoke spread to East and Southeast Asia during the 1980s and subsequently to other parts of the world.

In Japan, it has long been common to provide musical entertainment at a dinner or a party. The Japanese drummer Daisuke Inoue was asked by frequent guests in the Utagoe Kissa, where he performed, to provide a recording of his performance so that they could sing along on a company-sponsored vacation. Realizing the potential for the market, Inoue made a tape recorder that played a song for a 100-yen coin. Instead of giving his karaoke machines away, Inoue leased them out so that stores did not have to buy new songs on their own. Originally, it was considered a somewhat expensive fad, as it lacked the live atmosphere of a real performance and 100 yen in the 1970s was the price of two typical lunches, but it caught on as a popular entertainment. Karaoke machines were initially placed in restaurants and hotel rooms; soon, new businesses called karaoke boxes, with compartmented rooms devoted solely to karaoke parties, became popular.

Add a photo to this gallery
Retrieved from "https://lovehina.fandom.com/wiki/Karaoke?oldid=10619"
Community content is available under CC-BY-SA unless otherwise noted.