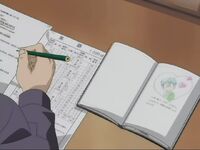 Keitaro's Diary is a dairy Keitaro Urashima keeps to record events in his life. Prominently featured in the anime, Keitaro tends to sketch accompanying pictures with his notations.

In the manga, while mentioned at various times, Keitaro is not shown with a dairy until HINATA 018. A Journey of Sorrow and Youth, where he starts a new journal while enroute to Kyoto, following his failure to get into Tokyo University once again.

Retrieved from "https://lovehina.fandom.com/wiki/Keitaro%27s_Diary?oldid=15400"
Community content is available under CC-BY-SA unless otherwise noted.