"I can't believe you were only gone three days, it seems much more like three years."
—Kikuko Onoue 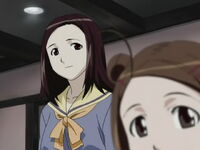 Kikuko Onoue (尾上 菊子, Onoue Kikuko), Sachiyo Matsumoto and Emi Ichikawa are a group of highschool juniors who look up to Motoko Aoyama and worship her as a role model due to her stoic nature and disdain towards boys.

Only appearing in the anime and OAVs, the trio of fangirls devotedly follow Motoko whenever possible, much to Motoko's irritance. However, Motoko eventually learns to appreciate their attention, particularly during Christmas when she realises how lonely her life had become.
The tallest of the three girls, Kikuko once became possessed by a murderous spirit who despised and killed men.

Retrieved from "https://lovehina.fandom.com/wiki/Kikuko_Onoue?oldid=10058"
Community content is available under CC-BY-SA unless otherwise noted.