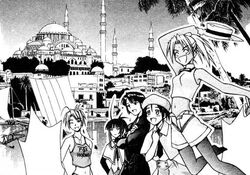 The Kingdom of Molmol is an island located near Pararakelse in the Pacific Ocean, near the International Date Line.
Ruled by a monarchy, the kingdom’s location is noted for once being at the centre of an ancient Turtle Civilization that Noriyasu Seta is searching for. The kingdom’s people are notable for being vigorously eccentric and rather brash in comparison to other countries such as Japan.

In the manga, Keitaro Urashima originally came to the island after Seta "recruited" him to help replace an ancient stolen artifact. The Hinata residents follow after them when Granny Hina sends a fax dictating her arrival and the official handing over of the dorm’s deed to Keitaro.
In the anime the kingdom isn’t shown, though it is mentioned. The country has a military conscript program that even royalty must obey, with a minimum of three years service. This military is evident in the manga with the presentation of the Royal Air Force’s Third Mobile Fleet.

The appearance of the Kingdom of Molmol is based on the city of Istanbul, Turkey.

Community content is available under CC-BY-SA unless otherwise noted.
Advertisement