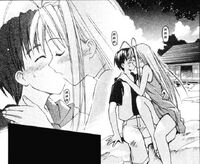 Kissing is the act of pressing one's lips against the lips, cheek, head, hand or other body parts of another person, animal or object.
Kissing on the lips is a physical expression of affection or love between two people, in which the sensations of touch, taste, and smell are involved. Depending on the culture and context, a kiss can express sentiments of love, passion, affection, respect, greeting, friendship, and good luck, among many others.

The act of kissing another person's lips has become a common expression of affection among many cultures worldwide. Yet in certain cultures, kissing was introduced only through European settlement; prior to this, kissing was not a routine occurrence.
In the Middle Ages it was most often a social gesture and was considered a sign of refinement of the upper classes. In China and other Asian countries a similar expression of affection consisted of rubbing one's nose against the cheek of another person, similar to "nuzzling", whereas mouth-to-mouth kissing was reserved for sexual foreplay.

There are many type of kisses depending on the context of the situation. When lips are pressed together for an extended period, usually accompanied with an embrace, it is an expression of romantic and sexual desire and usually refered to "Making Out". The practice of kissing with an open mouth, to allow the other to suck their lips or move their tongue into their mouth, is called "French kissing" and the act of kissing someone on their skin and leaving a red welt mark due to having suckled on them is known as a "Hickey".

Retrieved from "https://lovehina.fandom.com/wiki/Kissing?oldid=14771"
Community content is available under CC-BY-SA unless otherwise noted.