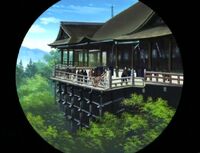 The Kiyomizu Temple (Kiyomizu-dera, 清水寺), officially known as Otowa-san Kiyomizu-dera is an independent Buddhist temple built on the hillside of Mount Otowa in eastern Kyoto.


Founded in the early Heian period, the temple's main hall has a large veranda, supported by tall pillars, which juts out over the hillside and offers impressive views of Kyoto.
The main hall was built around, and ultimately named after, the Otowa-no-taki waterfall, where a shrine was built to cause three channels of water from the waterfall to fall into a pond.

Kiyomizudera has long been a destination for pilgrims and is Kyoto's most popular tourist destination, attracting about 4.5 million visitors each year and possessing a total of thirty structures of varying religious significance. The temple is part of the Historic Monuments of Ancient Kyoto and became a UNESCO World Culture Heritage site in 1994.

It is said that in the year 778, Buddhist priest Enchin was inspired by a divine dream to travel up Kizu-gawa river to find a fountain of pure water at the foot of Mount Otowa. There he met Gyoei Koji, a Buddhist hermit, and was given a block of sacred wood. Enchin carved a statue of Kannon Bosatsu out of the block and enshrined it in the thatched hut which Gyoei had been living within.
Two years later, a military General "Sakanoue no Tamuramaro" (758-811) traveled up the mountain on a hunting expedition and met Enchin who lectured him on the merciful teaching of Kannon after admonishing him for killing a deer. Tamuramaro converted to Buddhism and became a devotee to Kannon and issued the building of a hall for the statue in 798.

Originally, the Kiyomizu temple was connected to the Kofuku-ji temple in Nara and had become part of a feud with the Enryaku-ji temple resulting in factional strife that began around the year 999. Since then, fires in 1146 and 1165 were set by the followers of Enryaku-ji and most of Kiyomizu's buildings were burned down by fires of war in 1469 and 1629. Having been rebuilt at least 10 times, the main hall of the temple was rebuilt from 1631 to 1633 during a restoration order by Iemitsu Tokugawa (the grandson of Ieyasu Tokugawa) during the Edo period. Additional verandas and halls were constructed during the period to accommodate large numbers of pilgrims.

The images of the Kiyomizu temple are based off of real-life images of the temple in Kyoto.
The height of the building's edge from the stage was exagerated slightly in the manga, in reality the stage is 12 meters from the ground. The view depicted as Keitaro looks over the edge of the stage can also not be had in real life.

While the main hall is primarily featured in Love Hina, in Negima! Magister Negi Magi additional sections of the complex are shown. Such as the Otowa waterfall, where three channels of water fall into a pond. Visitors can catch and drink the waters, which is believed to have therapeutic properties. Drinking the water of the three streams is said to confer wisdom, health, and longevity. However, some Japanese believe that you must choose only two; if you are greedy and drink from all three, you invite misfortune upon yourself.

The temple complex includes several other shrines, among them the Jishu Shrine, dedicated to Ōkuninushi, a god of love and "good matches". Jishu Shrine possesses a pair of "love stones" placed 6 meters/20 feet apart, which lonely visitors can try to walk between with their eyes closed. Success in reaching the other stone with their eyes closed implies that the pilgrim will find love, or true love. One can be assisted in the crossing, but this is taken to mean that a go-between will be needed. The person's romantic interest can assist them as well.

Retrieved from "https://lovehina.fandom.com/wiki/Kiyomizu_Temple?oldid=14078"
Community content is available under CC-BY-SA unless otherwise noted.