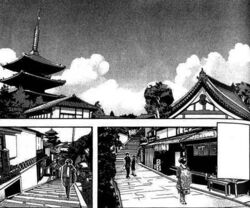 Kyoto (京都 Kyōto) is a city in the central area of the island of Honshū, Japan. Formerly the Imperial Capital (before Tokyo), it is now the capital of the Kyoto Prefecture as well as a major part of the Osaka-Kobe-Kyoto metropolitan area.

Famed internationally for its historic structures, Kyoto is actually a city intermixed with the old and the new. Possessing geisha, pagoda temples, shrines, gardens and works of art, Kyoto is also a modern city with office complexes, modern shopping malls and subway stations.
Despite possessing the same modern facilities, businesses and shopping malls as other Japanese cities, with over 1,650 Buddhist temples, over 400 Shinto shrines, two vast Imperial complexes, 20 percent of Japan's national treasures, 15 percent of Japan's Important Cultural Properties, 24 museums, gardens and 37 universities and colleges, Kyoto is considered to be one of the best preserved cities in Japan.

Kyoto began as a small village called Uda and became the Imperial Capital of Japan in 794, when, in Nara, and the Emperor chose to relocate the capital to a region far from Buddhist influence after summarizing that the Buddhist clergy had become too involved in the affairs of the Imperial government. Choosing Uda as the base of his new capital, the Emperor had the village remodelled based on the design of the Tang capital Chang'an in China and renamed it " Heian-kyō"; kick-starting what would become known as the Heian Period of Japanese history (794-1192).

Flourishing as the country's new center of administration and culture and being renamed "Kyoto" ("capital city") in the 11th century, the capital suffered extensive destruction between 1467 to 1477 when half the city was burnt to the ground during the Ōnin War (a civil war between two clans that began over an argument who would succeed as the area's new shogun). As the conflict erupted into the Warring States/Sengoku Period (a 100-year-long conflict that erupted across the country after the Ōnin War) an ambitious daimyo named Nobunaga Oda drove the city's existing ruling council out of Kyoto in 1573 and claimed the city until his death within the Honnō-ji temple in 1582 during a coup enacted by one of Nobunaga's retainers.
Following his lord's death, daimyo Hideyoshi Toyotomi carried on Nobunaga's goal to unite Japan and stop the country-wide war; restructuring and updating Kyoto in the process.
During the Meiji Revolution around 1868, the village Edo was re-christened "Tokyo" ("Eastern Capital") and became the new capital of Japan following the Japanese Emperor's relocation to the new city.
Although Kyoto lost its status as the Imperial Capital, it was temporarily renamed "Saikyō" ("Western Capital") and remained as a backup capital at the direction of the Emperor; with the city's Imperial residences being preserved and the Takamikura (a special throne whose location traditionally marked the seat of the emperor) remaining within the Kyoto Imperial Palace.

Kyoto was spared much of the bombing in World War II that destroyed Tokyo, Nagoya, Osaka and other Japanese cities. When it came to deciding which city to drop the atomic bomb on, Kyoto was amongst those chosen due to the belief that the city's destruction "would most adversely affect the will of the Japanese people to continue the war." The Secretary of War, Henry L. Stimson, overruled the decision, arguing that destroying Japan's cultural capital was wrong, and the city was removed from the list of targets; being replaced by Nagasaki.

The pagoda seen in the background as Keitaro explores the East Mountain is based on part of the ancient temple of the Rinzai shu Buddhist sect. The original temple was destroyed during the Ōnin War and now only the pagoda tower and some of the temple remains.
The pagoda seen behind Kaolla and Shinobu when they arrive at Kyoto is actually based off of the five-story pagoda at the Senso-ji Temple in Tokyo.

The staircase Keitaro is seen walking up is San'nen Zaka, also known as San'nei Zaka, which literally translates to "Three-Year Hill." Among the children in Kyoto, it is said that if you fall here, you will die within three years. Therefore, you hardly see children running around in this area. San'nen Zaka is very steep, and it is tiring to walk up this hill, especially in the summer.

Other Kyoto images are based on images taken along the Higashiyama tourist path and the Yasaka Shrine.
The teahouse Naru was visiting near the Shinmei-ryu Dojo is based a soba shop in the Nishikyou district of Kyoto. While the bridge she and Keitaro are later seen on is based on the Sanjō Ōhashi bridge stretching across the Kamo River in Kyoto.

Retrieved from "https://lovehina.fandom.com/wiki/Kyoto?oldid=14580"
Community content is available under CC-BY-SA unless otherwise noted.