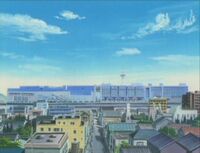 Kyoto Station (Kyoto-eki), located in Kyoto, is the second-largest train station in Japan and one of the country's largest buildings.
In addition to trains the station also has a shopping mall, hotel, movie theater, museum, the Isetan department store, tourist information centers, restaurants, shops and several local government facilities under one 15-story roof.

Opening in 1997, it is 70 meters high and 470 meters from east to west, with a total floor area of 238,000 square meters. Architecturally, it exhibits many characteristics of futurism, with a slightly irregular cubic facade of plate glass over a steel frame.

While they are depict as being in the Kyoto Station, the train station in which Naru and Keitaro are seen by Shinobu and Kaolla is based on the Tokyo JR "Aqueduct Station" and "Ochanomizu Station", both of which are located in the Chiyoda ward.

Retrieved from "https://lovehina.fandom.com/wiki/Kyoto_Station?oldid=15363"
Community content is available under CC-BY-SA unless otherwise noted.