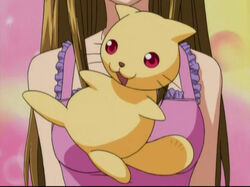 Liddo-kun, also known as Mr. Chupi in the English Dub of the anime, is a squirrel-like cartoon character popular during Keitaro Urashima's childhood.

Naru Narusegawa, Keitaro and Mutsumi Otohime are all old fans of the series, however, while they can accurately recite the show's theme song, each have varying recollections of Liddo-kun's adventures.
In Mutsumi's recollections the trio would often come to an unfortunate end, such as being boiled in a pot all together, or The Professor and Big Dummy eating Liddo when they were starving during a snowstorm.

Naru keeps a plush Liddo-kun doll which was given to her as a child by Keitaro, which was given to him by Mutsumi, although through much of the series she remembers only that it was given to her by "a friend". She later discovers the identity of the original owner was written on the plush's bottom. The plush usually sits on a board covering the hole between Naru and Keitaro's room.

Retrieved from "https://lovehina.fandom.com/wiki/Liddo-kun?oldid=16214"
Community content is available under CC-BY-SA unless otherwise noted.