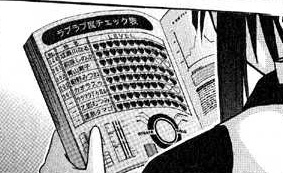 The Love-Love Degree Graph is a graphical survey Kanako Urashima conducted on how much each member of the Hinata Residents loved her brother, Keitaro Urashima.

Initially intending to observe and conduct the survey in secret, she later furthered her research via a "service-trial" in which each member had to demonstrate their serving abilities with Mutsumi Otohime impersonating their "costumer" Keitaro.

After discovering how much each girl had feelings for her brother, Kanako attempted to force them into abandoning their feelings for him which resulted in the girls mutineering against her.

The results of the survey were as follows: (The base number (50) denotes a friendship level of love) 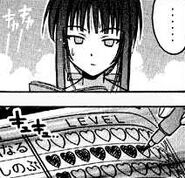 Retrieved from "https://lovehina.fandom.com/wiki/Love-Love_Degree_Graph?oldid=10791"
Community content is available under CC-BY-SA unless otherwise noted.