Created by Ken Akamatsu and produced with assistance from Cu-Little2, the Love Hina manga series was serialized following the completion of Akamatsu's previous work, A.I. Love You.

Following a twelve month concept schedule (September 1997 - August 1998), the first Love Hina chapter was released October 21st, 1998 in Weekly Shōnen Magazine. Continuing for 123 chapters, with the final chapter featured in the magazine's October 31st, 2001 issue.
Following its initial release, the series has proved extremely popular around the world, both commercially and critically, and received numerous industry awards in Japan and North America, as well as praise from critics.

Originally serialized in Weekly Shōnen Magazine, Love Hina's 123 chapters were later collected and published in 14 tankōbon volumes by Kodansha, in a slightly changed format of 118 numbered chapters, together with a 2 chapter epilogue. The first 11 volumes of these manga sold over 6 million copies in Japan. The series was later re-released in a partially coloured format known as the "Iro Hina Version" ("Colour Hina Version") at an increased price.

Following this the manga series was later licensed for an English language release in North America and the United Kingdom by Tokyopop, which released 14 volumes between May 7th, 2002 and September 16th, 2003. The series has since appeared consistently in Tokyopop's top five selling manga and has been reprinted several times. However, in August 2009, it was revealed that Tokyopop's license had been left to expire by Kodansha and would not be renewed.

The series was also licensed for an English language release in Singapore by Chuang Yi and for regional language releases in France and Québec by Pika Édition, in Spain by Glénat, in Brazil by Editora JBC, in Mexico by Grupo Editorial Vid, in Poland by Waneko, in Greece by Compupress, and in Sweden and Norway by Egmont Manga & Anime. Kodansha had also published a bilingual (English and Japanese) edition under the "Kodansha Bilingual Comics" label, with English texts translated by Giles Murray. Eight volumes were produced under the bilingual format but were removed from sale after the series was licensed by Tokyopop. 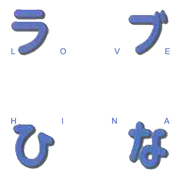 Title from the Kodansha manga

Title from the Tokyopop manga
Add a photo to this gallery

Retrieved from "https://lovehina.fandom.com/wiki/Love_Hina_(manga)?oldid=15456"
Community content is available under CC-BY-SA unless otherwise noted.