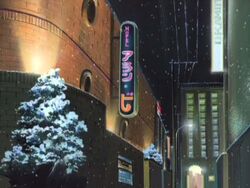 A Love Hotel is a hotel designed for short stays, from a few hours to overnight, popularized as the location where couples go for private liasons.

Becoming popular after 1958, when prostitution was made illegal, Love Hotels became an essential part of a couple's relationship in Japan, as many couples still lived with their parents and families, creating limited opportunities for privacy.
The hotels are often located near train stations or highways for ease of access, and much of the hotel is automated to limit awkward interactions with staff. Many are also outrageously themed with various decorations and playthings inside the rooms for the customers' convenience.

The hotel Shinobu took Keitaro to on their date is based on a hot spring inn in Yamagata City.

In A.I. Love You, in an attempt to further their relationship, Hitoshi generates a "perfect date" for himself and Saati to go on. The computer's instructions for the date, based on information garnered from numerous magazines, instructed how Hitoshi should look, that he should take Saati to a movie and how to hold her hand during said movie. The instructions also advised him to take her shopping following the movie, to an arcade, a restuarant and the park before advising him to go to the Dragon Palace Hotel. While the date went smoothly it was later discovered that Saati, too, was following a similar set of instructions from her own generated date and had no idea what the purpose of the hotel was for. As Hitoshi was too embarrassed to tell her, they never went in.

Retrieved from "https://lovehina.fandom.com/wiki/Love_Hotel?oldid=11617"
Community content is available under CC-BY-SA unless otherwise noted.