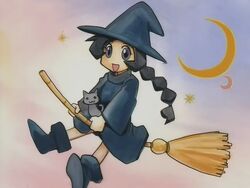 Magical Girl is a well-known and well-used character stereotype/template in Japanese Animation, Manga and related fictional material. Known as Mahou Shoujo ("magical girl") or just Majokko ("witch-girl"), Magical Girl characters are typically young girls or women who are empowered with fantastic/magical powers that both assist and complicate their lives.

First appearing in the late 1960's, the first two anime/manga series to feature the character type (Sally The Witch and Himitsu No Akko-chan) credited their inspiration for the character from the American live-action series Bewitched.
The genre gradually evolved, with Codename: Sailor V (later known as Sailor Moon (1992)) and Cardcaptor Sakura (1996) becoming the modern examples of the typical Magical Girl stereotype.

In Negima! Magister Negi Magi, various girls are proficient in magic and magical abilities. These and other girls can also transform through the use of Pactio contracts formed with various mages. After witnessing two of her classmates performing these transformations, Haruna Saotome outright states that they are Magical Girls.

Retrieved from "https://lovehina.fandom.com/wiki/Magical_Girl?oldid=13715"
Community content is available under CC-BY-SA unless otherwise noted.