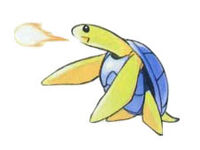 First appearing in Chapter 41, Mecha-Tama (also known as Mecha-Tamago) is the name of Kaolla Su’s series of robot turtles. All of which are designed after Hot Springs Turtles for Kaolla’s perceived final showdown with Tama-Chan. The majority of the Mecha-Tamas, specifically the larger variations, are stored in the Hinata House’s underground garage facility.

In the duration of the Love Hina manga series, Kaolla has built a total of 30 Mecha-Tamas, only nine of which are shown. In the Anime, only four are shown. Three of those were based on Manga-MTs with slight differences, and one is new. 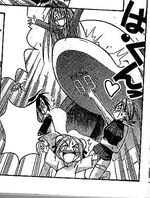 This mecha is designed after the image of a Hot Springs Turtle queen in that it possesses flying fins and yet is larger than even an adult Hot Springs Turtle.
By far more biological in appearance than any of the other Mecha-Tamas, Tamera Zero can expel gas from its mouth as well as various cabled appendages in which to ensnare a victim and drag them into its mouth (Ch 93).

The first Mecha-Tama shown (Ch 41), Mecha-Tama 01 is designed after a flying Hot Springs Turtle. Capable of flight the robot is powered by an umbilical cord and controlled by a hand-held remote. It possesses Vertical Take-Off jets and can perform a spinning attack. It also possesses the ability to fire plasma balls and an ice beam cannon.

Mecha-Tama 03 is used by Naru and Kaolla to spy on Keitaro and Mutsumi's date (Ch 56). It seems to be primarily a spy and infiltration unit.
Weighing at 22 pounds, MT3 comes equipped with organic armor to appear the same as an organic turtle. It also possesses an internal camera capable of tracking movement up to three miles away, the images of which are transmitted to a screen on the mecha’s hand held controller.
While possessing no umbilical cords the mecha does possess an antenna on its head. Other additions include; voice speaker, evacuation jets and a self destruct warhead.

The High Mobility Cannon Mecha-Tama 04 is the transportation used by Kaolla, Sarah and Shinobu on Parakelese Island in an attempt to bring back Naru and Keitaro (Ch 65).
Designed after the larger, adult form of the Hot Springs Turtle, this mecha is an armoured transportation unit; possessing reinforced armour, two machine guns, a gatling gun, two missile launchers, eight missiles. It can reach a top speed of 280 kmph and convert to a marine mode raft.

MT5 is a mobile mechanical unit built to house a single pilot within its shell. From there the pilot can control the mecha’s movements, transforming between biped, quadruped, or flight modes depending on the situation and/or what weapons need to be used.
The unit possesses missiles fired from its shell, mandible appendages that double as legs and jets, and a “Super Kaollan Cannon” hidden within its mouth.

MT6 is a small, high propulsion jet designed in the image of a Hot Springs Turtle. Equipped with missiles on its wings, Kaolla can ride on the mech’s back while in flight (Ch 118). 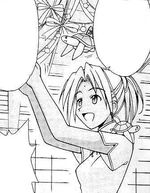 MT28 appears in Epilogue 1 hovering above Kaolla as she puts up wedding decorations with Tama on her shoulder. 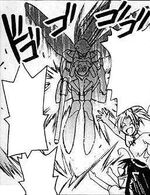 MT30 is a more refined variant of MT5. Due to its one panel appearance (Epilogue 1) it is unknown whether it is a mechanical android or another piloted mobile unit. More humanoid in form than previous Mecha-Tamas and has a large cannon on its right arm and possesses the ability of flight.

Based on Mecha-Tama 01 from the manga, Mecha-Tama 01's appearance is based on the appearance of Tama-Chan. It can fly via a jet propulsion system and fires a beam weapon from its mouth. It is powered via an umbilical cord and controlled by a hand held remote device.

Based on Mecha-Tama 04, this Mecha-Tama is a transportation unit used by Kaolla, Sarah, Mei and Shinobu on Parakelese Island in an attempt to bring back Naru and Keitaro (Love Hina Spring Special).
Designed after the larger, adult form of the Hot Springs Turtle, this mecha is launched via a hidden launch platform underneath the main entrance stair case of Hinata House. It is capable of both aerial and land movement and possesses duel missile launchers.

Appearing in Episode 12, possibly based on the manga version of Mecha-Tama 03, this Mecha-Tama possessed organic armor, was capable of firing fireballs as well as possessing independent thought. This caused it to go rogue, acting without Kaolla’s consent it began stealing items from Hinata House. It then began to consume the items, enabling it to transform into a larger metallic form before transforming again into a more monstrous form.
As with the manga version, this Mecha-Tama has a self destruct device but using it will result entire Tokyo(or maybe, the world) be destroyed. It has both an external umbilical power source and an internal battery power source. It was finally defeated by Motoko's sword technique.

Rogue Mecha-Tama's 3rd form
Add a photo to this gallery

Mechanical offspring from the rogue Mecha-Tama, the Mini-Tamas occupied the tunnels within the mountain underneath Hinata House, creating their own civilization they multiplied their numbers by recycling garbage dumped by Haruka behind the Hinata Café (Ep 15).
The Mini-Tamas were recruited by Kanako Urashima to assist in her conflict against the Hinata residents (Love Hina Again).

Retrieved from "https://lovehina.fandom.com/wiki/Mecha-Tama?oldid=15138"
Community content is available under CC-BY-SA unless otherwise noted.