"That's not true, that's not true at all because I know what's in Naru's heart and she really does love you."
—Keitaro Urashima

Epilogue II. Where We Begin

While initially only appearing in the anime series, Naru mentioned having a sister at least twice during the manga series before Mei herself appears in two cross-over cameos during the manga's epilogue chapters.

When her father married Naru's mother, Mei was excited as she had always dreamed of a big sister and was going to get one with Naru, however, the marriage was not well received by the elder sibling, who saw the event as her mother replacing her with a new husband and daughter.
After Naru left to live in the Hinata House dormitory, Mei was crushed but stayed with her father and Naru's mother.

Eventually coming to think that Naru's leaving was due to her and that if she left Naru would come home and her family would be happy again, Mei attempts to transfer to a school overseas in Canada but her parents refuse.
Not to be dissuaded from her plan to bring back her sister, Mei visits the Hinata House in order to bring Naru home and attempts to disrupt the relationship between her sister and Keitaro by increasing the odds of Keitaro falling for Mutsumi Otohime, going as far as revealing a photo of the pair as children and suggesting the Mutsumi was the Promise Girl that Keitaro had been searching for.

When Naru, whose strained patience with Mei was only being sustained by Keitaro, receives a call from home and learns that Mei had run away from home after asking for the transfer to Canada, she mistakenly concludes that Mei intended to have Naru return home so that she could go to Canada and accuses her of doing such.
Depressed over her sister's constant anger with her, Mei breaks down but is reassured that Naru cares for her by Keitaro, who also offers to help her mend her relationship with her sister.

As Naru becomes distracted by the strong possibility that Mutsumi was Keitaro's promise girl, Mei observes and realises how important Keitaro is to Naru, inspite of her sister's insistance to the contrary.
When Grandma Hina returns to the dormitory and enacts repairs, the tendants have to momentarily return home, however, due to having failed the last exam Keitaro stays with Mutsumi in her apartment instead. When Naru attempts to also stay with them, Keitaro insists that she spend time with Mei at her home.

Mistaking Keitaro's insistance that she go home with Mei to mean he wanted to spend time with Mutsumi and not her, Naru reveals the photo of Mutsumi and Keitaro together as children and leaves them to be together.
While initially happy that Naru was finally home, Mei began to notice how troubled her sister was over Keitaro and so assisted Naru's friends in convincing and reassuring her that the relationship with Keitaro was not lost.

Following the incident, Mei continued supporting Naru and visited the Hinata House on occasion; visiting Tokyo University with the other Hinata Residents to see if Naru had gained entrance to the university, and supporting Naru and Keitaro when they were attempting to meet before midnight on Christmas Eve. Mei was also present during the incident surrounding the arrival of Keitaro's own step-sister, Kanako Urashima, at the dormitory. 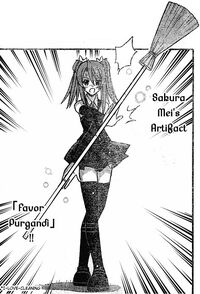 In Negima! Magister Negi Magi, Mei is revealed to be a Ministra Magi prodigy named Mei Sakura. Transfered to Mahora Academy from the Johnson Magic School in America, Mei operates as a member of the Student Council.
Skilled in fire magic, Mei has formed a Pactio with her senpai, Takane D. Goodman, and possesses a magical broom as her Pactio artifact.

While intially working as security for the academy, Mei and the other student council members become caught up with Negi Springfield's battle in the magical world and end up assisting him in various battles to save the land.

Retrieved from "https://lovehina.fandom.com/wiki/Mei_Narusegawa?oldid=15911"
Community content is available under CC-BY-SA unless otherwise noted.