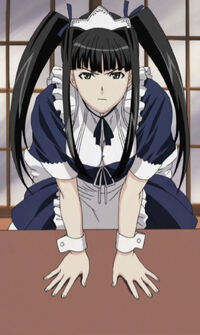 Miracle Maid Motoko is a persona Motoko Aoyama adopts following being defeated and disowned by her sister, Tsuruko Aoyama.

Acquiring a French Maid Uniform from Mitsune's closet, Motoko took to performing the domestic tasks of the Hinata House; cooking, cleaning, taking care of the tenants and housing maintenance.
Motoko's tenacity, however, did not go over too well with the apartment residents and Motoko abandoned the persona after overhearing how badly her attempts were being received.

A series of non-canon adventures featuring Miracle Maid Motoko was made for a magazine appearance. The story was later reprinted for the Ani Hina Art Collection artbook.

Retrieved from "https://lovehina.fandom.com/wiki/Miracle_Maid_Motoko?oldid=15800"
Community content is available under CC-BY-SA unless otherwise noted.