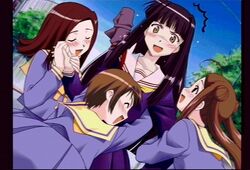 Drawn by her tall height and her gallant, cool and somewhat imposing demeanor, which they consider "cool", Sachiyo Matsumoto, Emi Ichikawa and Kikuko Inoue follow Motoko Aoyama around and attempt to dote on her, much to Motoko's chagrin.

Following Keitaro Urashima's arrival to Hinata House and Motoko's wary acceptance of him living there, the group's "leader", Kikuko Inoue, who was at the time being possessed by a Vengeful Spirit, chastises Motoko for accepting "a man" to live in the same house as her as well as her increasingly feminine clothing choices.
In spite of her fledging irritance with their worshipping, Motoko grows to recogonize their friendship and, during Christmas when she began to realize how alone she truly was, the girls' arrival and invitation to spend Christmas with them cheered her up.

Retrieved from "https://lovehina.fandom.com/wiki/Motoko_Aoyama%27s_Fan_Club?oldid=10650"
Community content is available under CC-BY-SA unless otherwise noted.