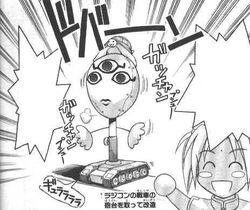 Mr Cherry, called “Krishna” in the manga, is a robot designed and created by Kaolla Su for the purpose of teaching Shinobu Maehara how to kiss. The sensor in its head searches for the target’s face and delivers a kiss. The motor in its mouth rotates cherries to add to the kissing experience.
Controlled by remote, the robot uses the traction treads from Su’s Toy Tanks to chase after its target.

Retrieved from "https://lovehina.fandom.com/wiki/Mr_Cherry?oldid=11297"
Community content is available under CC-BY-SA unless otherwise noted.